Regulating cell behavior and cell fate are of great significance for basic biological research and cell therapy. Carbohydrates, as the key biomacromolecules, play a crucial role in regulating cell behavior. Herein, “modular” glycopolymers were synthesized by reversible addition–fragmentation chain transfer polymerization. These glycopolymers contain sugar units (glucose), anchoring units (cholesterol), “guest” units (adamantane) for host–guest interaction, and fluorescent labeling units (fluorescein). It was demonstrated that these glycopolymers can insert into cell membranes with high efficiency and their residence time on the membranes can be regulated by controlling their cholesterol content. Furthermore, the behavior of the engineered cells can be controlled by modifying with different functional β-cyclodextrins (CD-X) via host–guest interactions with the adamantane units. Host–guest interactions with the modular polymers were demonstrated using CD-RBITC (X = a rhodamine B isothiocyanate). The glycopolymers were modified with CD-S (X = seven sulfonate groups) and CD-M (X = seven mannose groups) and were then attached, respectively, to the surfaces of mouse embryonic stem cells for the promotion of neural differentiation and to the surfaces of cancer cells for the enhancement of the immune response. The combination of multiple anchors and host–guest interactions provides a widely applicable cell membrane modification platform for a variety of applications. 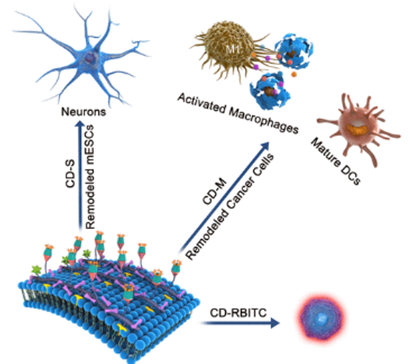