The development of effective antibacterial surfaces to prevent the attachment of pathogenic bacteria and subsequent bacterial colonization and biofilm formation is critically important for medical devices and public hygiene products. In the work reported herein, a smart antibacterial hybrid film based on tannic acid/Fe3+ ion (TA/Fe) complex and poly(N-isopropylacrylamide) (PNIPAAm) is deposited on diverse substrates. This surface is shown to have bacteria-killing and bacteria-releasing properties based on, respectively, near-infrared photothermal activation and subsequent cooling. The TA/Fe complex has three roles in this system: (i) as a universal adhesive “anchor” for surface modification, (ii) as a high-efficiency photothermal agent for ablation of attached bacteria (including multidrug resistant bacteria), and (iii) as a robust linker for immobilization of NH2-terminated PNIPAAm via either Michael addition or Schiff base formation. Moreover, because of the thermoresponsive properties of the immobilized PNIPAAm, almost all of the killed bacteria and other debris can be removed from the surface simply by lowering the temperature. It is shown that this hybrid film can maintain good antibacterial performance after being used for multiple “kill-and-release” cycles and can be applied to various substrates regardless of surface chemistry or topography, thus providing a broadly applicable, simple, and reliable solution to the problems associated with surface-attached bacteria in various healthcare applications. 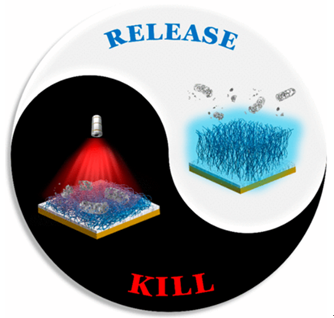